Just like with Super Donkey Kong, the controls, graphics and audio are similar to the SNES game, but downgraded to suit the NES hardware. The player can only control Diddy Kong alone, and due to the lack of Dixie Kong, a single hit from an enemy will result in death, much like in Super Donkey Kong '99. Several things from DKC2 are present in the game, including banana coins, crates, the K-O-N-G letters and the goal target at the end of the level which is also accompanied by Diddy's victory dance. Notably, there are only three levels in this game.

The map screen for Gangplank Galleon is present in this game, but the only thing you can do here is to press A to start the next level. The first level is a replica of Pirate Panic from DKC2 (sans Rambi and a few other things) while the second level is based on Mainbrace Mayhem, and the third level is based on Rattle Battle complete with Diddy transforming into Rattly, though Rattly cannot run or use his Super Jump ability. After the third level the player is taken to a screen which features a "THE END" message accompanied with the Game Over image (which is also present in the Game Over screen). 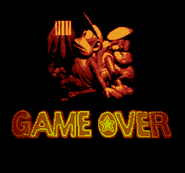 A Game Over screen when the player lose all the lifes. 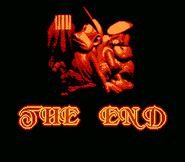 An ending screen when the player passed three levels.
Add a photo to this gallery

Retrieved from "https://bootleggames.fandom.com/wiki/Super_Donkey_Kong_2?oldid=40951"
Community content is available under CC-BY-SA unless otherwise noted.