Super Donkey Kong 3 is a Game Boy game based on Donkey Kong Country 3. It was created by Makon Soft at an unknown date.

Because it was released on Game Boy Color, Super Donkey Kong 5 was given a red and green color palette, like other Makon Soft titles for the handheld.

Aside from the color palette, Super Donkey Kong 5 only had a few differences. The title screen and the game's packaging were taken from the Japanese box art of Diddy Kong Racing, even though the two games have no relation. The intro features a different picture, and lastly the world map and level order were changed. 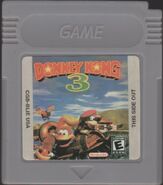