Additionally, Rugal serves as the final boss, despite not appearing in the official The King of Fighters '97.

While many of the characters are taken from the previous official King of Fighters ports done by Takara, several of them are new sprite sets that were designed specifically for this game and do not appear in any official GB ports. The new characters are possibly rescaled in order to fit the regular sprite size.

Unusually for an unlicensed GB game, it comes with a border when played on a SNES Super Game Boy. 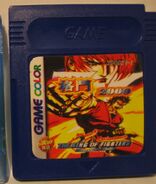 The King of Fighters 2002 cartridge.

Complete copy of the Taiwanese release.

Back of the Taiwanese release's box. 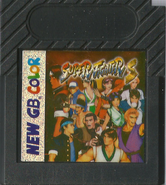 English cartridge of Super Fighter S. Despite the different label the game itself is completely unchanged from the Taiwanese release. 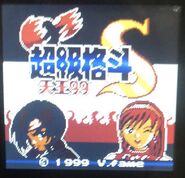