Super Gun is a shoot-'em-up Famicom game developed and released by NTDEC in 1992.

The pilot has lost control of their fighter aircraft, it is being attracted by an unknown magnetic force and is stuck in automatic pilot control. As the pilot's jet enters a forbidden area, they lose contact with the base. The player controls the pilot flying his jet fighter in areas with many enemies and hazards.

The credits appear right after completing the last stage. There does not appear to be any conclusion to the story whatsoever. 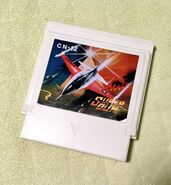 Prototype of the Caltron 9-in-1 cartridge.
Add a photo to this gallery
Retrieved from "https://bootleggames.fandom.com/wiki/Super_Gun?oldid=44222"
Community content is available under CC-BY-SA unless otherwise noted.