Super II Sonik (超级音速小子 Super Sonic 2) is a Game Boy Color game made by Sintax. It’s a hack of Pokemon Platinum, another Sintax title, starring Sonic, Tails, and Knuckles. The order of the levels has also been switched around. As with Pokemon Platinum, there is a MP bar at the bottom which seems to not actually do anything. 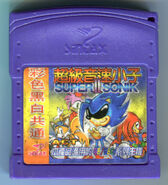 Back of box
Add a photo to this gallery
Retrieved from "https://bootleggames.fandom.com/wiki/Super_II_Sonik?oldid=42877"
Community content is available under CC-BY-SA unless otherwise noted.