Despite the name, this is actually a port of the first Super Mario Bros. and is based off the SNES port. The engine is remade, and as a result the game is much more difficult to control. The bosses at the end of each world can now be jumped on like a standard enemy. Unlike bosses from Super Mario Bros. 3, the bosses die after only one stomp, which makes the battles fairly easy. It's also more glitchy than the original game, a prime example being the enemies glitching in certain situations. The graphics and music are taken from the original game, but the level intro/status screen is completely different and the music is slightly different here. Mario's small sprite seems to be an edit of his big sprite.

The SNES music has also been ported to the Mega Drive quite well. When Bowser is defeated for the last time, Peach can finally be saved although her sprites seem to be glitching in a indescribable manner. As you save the Princess, the text "THANK YOU SONIC THE KINGDOM IS SAVED NOW TRY AGAIN" is displayed.

An original cartridge of Super Mario 1998 2 (note the box however is not the original).

The games original box can be seen in the back.

A copy of Super Mario Bros. 2 from Estonia. Note that the label uses art from the Super Mario 64 DS cover.
Add a photo to this gallery 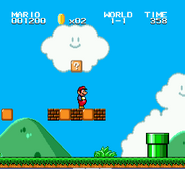 The start of World 1-1.
Add a photo to this gallery

Sonic Jam 6 is a version of Super Mario Bros. 2 featuring Sonic instead of Mario. This version replaces the title screen with ported version of Sonic Jam's and includes a screenshot of the Sega Mega Drive version of Sonic 3D Blast's intro to overlap Mario's face on the level intro/status screen. However, his face wasn't removed in the bonus areas.

As with Super Mario Bros. 2, the game is a direct port of the Super Mario All Stars version of Super Mario Bros on the SNES, with the only changes being the title screen, the "2 player mode" was deleted, level intro/status screen, and Mario's sprites replaced with Sonic's from Sonic The Hedgehog 3 and the sprites of the mushrooms, fire flowers and coins are badly colored. The gameplay is identical to the original version, with all the levels, enemies and powerups. As you start the game, instead of being a shorter version, Sonic is red. He will regain his normal color whenever a Mushroom is picked up. He'll turn red again when making physical contact with an enemy. His palette does not change when a Fire Flower is picked up, though he can still shoot fireballs.

Many assume this version was released later on, but it's difficult to tell because in the ending of Super Mario Bros. 2, Peach says "Thank you Sonic" instead of "Thank you Mario," as well as the presence of some graphical glitches at the bottom of the screen. 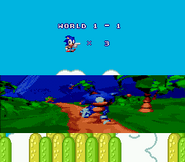 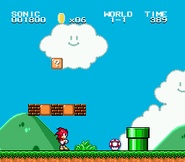 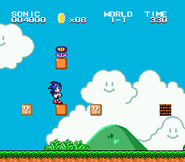 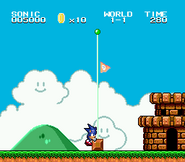 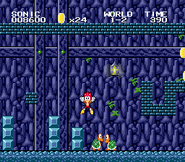 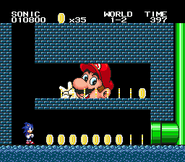 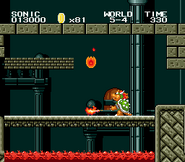 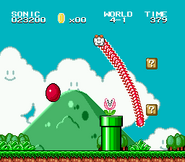 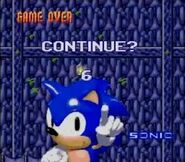 The cartridge featuring artwork from the Sonic Screensaver Site.

Back of Sonic 6's box

Another cart with Sonic Riders artwork.
Add a photo to this gallery

Super Mario Bros. 2's cartridge has an ID number of ES48002, while Sonic Jam 6 has an ID of ES48001. This implies that Sonic Jam 6 possibly was the first to be released, however, both were released in 1998. The ES in the ID also might imply a link to Waixing as they used the ES letters in the logo of their former company alias, ESC Co. Ltd.

Retrieved from "https://bootleggames.fandom.com/wiki/Super_Mario_Bros._2_(Mega_Drive)?oldid=40138"
Community content is available under CC-BY-SA unless otherwise noted.