The Super Retro Advance Adapter is an unlicensed adapter that allowed you to play GBA games on your Super NES. In reality its a Gameboy Advance on a chip using the power and controller of a Super Nintendo, with a port on the cartridge to connect it to your television.

The SRAA (Super Retro Advance Adapter) was made by the company RetroBit. The cartridge allowed players to use GBA games on their SNES.

The SRAA has no compatibility with Game Boy Color/Game Boy games, as it lacks the switch found on the original Gameboy Advance. 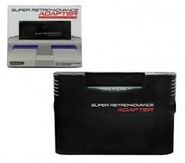 The Super Retro Advance adapter for the SNES.
Add a photo to this gallery
Retrieved from "https://bootleggames.fandom.com/wiki/Super_Retro_Advance_Adapter?oldid=30644"
Community content is available under CC-BY-SA unless otherwise noted.