Supervision 52-in-1 is a multicart that contains 50 games plus two hacked repeats. Its menu was later taken for Action 52.

This multicart is somewhat notable for likely being the source of the menu in Action 52, especially due to a prototype using practically the same menu screens. [1] Some of the games have missing titles on the title screen.

The board for this multicart also used by at least three others, a 58, 64, and 72 in 1. The 58-in-1 multicart uses a very similar menu to this and has most of the same games, (although credited to Super Technos, not to be confused with Technos) while 64-in-1 and 72-in-1 multicarts have the same games as the 58-in-1 but use a different menu.

Real game titles and/or extra information are in brackets. 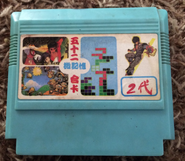 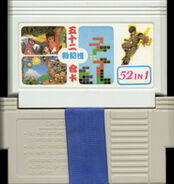 Slightly different label, on a standard famiclone shell attached to a 60-72 pin adapter

One of the many NES cart variants
Community content is available under CC-BY-SA unless otherwise noted.
Advertisement