This particular Nintendo-clone was hugely popular in Eastern Europe where it has gained cult status, and is still widely available on auction websites and flea markets. Due to economical restraints, official consoles were expensive or available only in a few places. The previous generation remained highly popular, particularly Terminator which was the most successful NES clone. It left a mark in pop culture and 1990's youth, establishing itself as antonomasia for 8-bit video gaming, to the point of being more popular than the original. 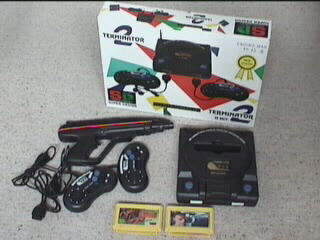 Terminator, like most known Famicom clones, was compatible with 60-pin Famicom cartridges, and partially compatible with some NES games, which could be played using a special converter. Original Nintendo games weren't popular however, due to raging piracy and lack of officially licensed products on the market. Majority of the games sold with and for the system were cheap pirated copies, manufactured mostly in Russia and China. Games for Terminator are widely available in Eastern Europe to this day, mostly on street markets and in small toy stores. The typical retail set included the system, two detachable controllers both with turbo buttons, which meant 4 buttons in total, a light gun, which also resembled the original Nintendo gun accessory except for a sleeker and more futuristic design, power supply and RF cable. The console had a built-in RF modulator, as well as audio video RCA connectors. The system itself didn't include any built-in games, but most versions were bundled with cartridges such as 1,000,000 in 1 or 9,999,999 in 1, supposedly featuring a million games, only a small number of which actually being separate games and the rest just renamed versions of the latter. Usually these were popular games such as Super Mario Bros or Duck Hunt. They were renamed though, possibly in an attempt to avoid lawsuits.

In Hungary, the console was called Sárgakazettás Nintendo to distinguish copies from the original sold by Stadlbauer kft. since 1991.

In Bulgaria some companies tried to use its popularity, for example Balkantronic which issued the Terminator 3 to the successor of the console which differed only with the box.

In Spain, it was usually received as a marketing gift for people who help in organizing sales conferences organized by various companies.

In the early 1990's, the Terminator system gained massive popularity in Eastern Europe, probably due to the fact that until 1993~1994 there was no official distributor of Nintendo products in that area. After establishing the distribution network in this part of Europe, the official Nintendo products were much more expensive than the Terminator and in most countries none of them was popular (except Game Boy). The Terminator consoles were mass-marketed by most of the major and smaller electronic stores and flea market. It is difficult to determine an exact price for the system, but in place like Gabrovo, Bulgaria in the mid 90's, one could buy it for the rough equivalent of 10 euros. In Sarajevo, Bosnia and Herzegovina after the Bosnian war, it was 15 euros equivalent. It was also sold in Argentina.