It is notable for a few reasons: it's of the few games featuring both English and Arabic language options, it includes both an in-game move list along with the one also printed on the cartridge label, and the main character and boss characters use sprites taken from Mortal Kombat. 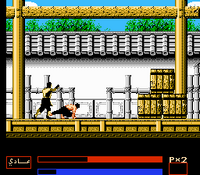 The player assumes the role of Bruce Lee, who uses Liu Kang's sprites. The levels are split into a platforming/action section and a one-on-one fighting section, with both sections using the same control mechanics. The end level bosses are other characters from the first Mortal Kombat, but renamed in a ridiculous fashion. The bosses are made up of Scorpion ("Suzuki"), Johnny Cage ("Ram"), Kano ("Tat"), Sonya ("Alice Yang") and Raiden ("Fatek"). Text screens before and after each level loosely refer to some of Bruce Lee's films.

Besides the main story mode there is also a "Battle" option, which allows the player to select and fight any of the five level bosses in a best 2-out-of-3 match. There is no option for a second human player to join in, nor the possibility to play as any of the other characters other than Lee.

Back label of the cartridge featuring the move list

Complete copy of the game, labeled as "Lee Dragon" (back view)