The Egg is a shooting game developed by Hummer Team and released on the Super New Year Cart 15-in-1 in 2005. Later, in 2006, a very similar game with VT03-enhanced graphics was released on the Samuri 60-in-1 plug and play. 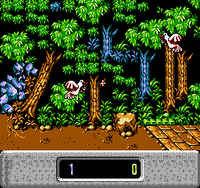 The game is similar to Duck Hunt. It has ducks flying around the screen, and the player has to shoot them. Unlike Duck Hunt though, the player uses the D-Pad to aim and presses A to fire, instead of using a light gun. The round is over when enough ducks have been shot.

The player receives points every time a duck is shot. Sometimes the ducks lay eggs, and when they hit the ground the player loses points. The game is over when the number of points goes below zero.

Also included on the 15 in 1 is an easier variant of The Egg called The Duck that remove the eggs lay from the ducks. Since there are no more points penalty, it is impossible to get a game over.

Retrieved from "https://bootleggames.fandom.com/wiki/The_Egg?oldid=38787"
Community content is available under CC-BY-SA unless otherwise noted.