Many of the backgrounds are lifted directly from other games (Fatal Fury) or heavily altered (Marvel Super Heroes). 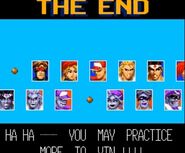 KOF 2000 ending.
Add a photo to this gallery
Retrieved from "https://bootleggames.fandom.com/wiki/The_King_of_Fighters_2000?oldid=15840"
Community content is available under CC-BY-SA unless otherwise noted.