BootlegGames Wiki
Register
Don't have an account?
Sign In
Advertisement
in: Games, Games based on cartoons, Famicom/NES games,
and 5 more

Tom & Jerry 3 is an unlicensed port of Tom & Jerry: Frantic Antics released for the Famicom by Dragon Co. at an unknown date based on the cartoon shorts of the same name.

In this game, players take turns controlling Tom and Jerry through 5 stages, with a boss being at the end of each one. Between them they possess the same abilities, such as speed, jump height and even the ability to throw projectile weapons.

Both Tom and Jerry also have the ability to run and crawl, both of which are activated in ways contrary to platforming norms. To run, the player has to hold down Down/Right or Down/Left, depending on the direction they wish to go in, and to crawl, the player must hold Down and then hold the A button.

This game has a unique game over screen for both Tom and Jerry (depending on who you play as). For Jerry, it has Tom grinning while Jerry is crying and Tom has Jerry smiling while Tom was being tied on a rope.

Two hacked versions of this game made by Nice Code (known as Primitive Man and Primitive Woman) can be found on some Famiclones. These hacks separate the Tom levels apart from the Jerry levels, thus making two different games from just one and due to this, the game lacks the unique game over screen. Some sprites are also edited in these versions. These versions were also released by Nanjing as Primitive and Primitve II which may combine the two and contained story. 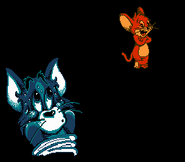 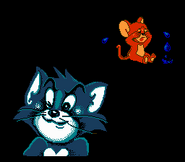