Twin Eagle (雙鷹 in Chinese) is a horizontal shooter developed by Joy Van in 1989. Despite the name, this game has nothing to do with the Seta game Twin Eagle (which actually received an official port to the system from Romstar).

The game has the player in control of the titular plane as they attack a terrorist organization (which are hinted to be Nazis going by the flags in some boss stages) stationed in the south pacific. There are three types of levels (sky, land, and sea) that loop three times at different times of the day and a boss fight against turrets for each level type. The player can collect various weapon upgrades as well as the ability to drop bombs on enemies below, though unlike Sidewinder the player's capabilities don't upgrade with each consecutive collection of the same power-up.

The AVE release of Twin Eagle (as Double Strike: Aerial Attack Force) changes the title screen, the player's plane design and relabels it the Thrasher Hawk-7, and removes the "no pains, no gains" screen. The enemy army is also called D.A.M.E.D. (or Destructive Armed Militant Enemy Devotee) probably because labeling them Nazis would've been touchy for the time. 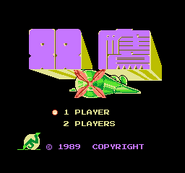 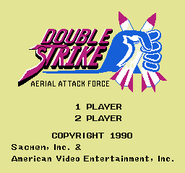 Title Screen from the AVE/Milmar release as Double Strike. 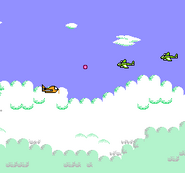 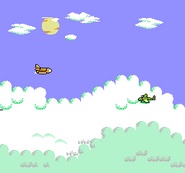