Ultimate League Soccer developed by Computer & Entertainment in 1991 is a Soccer game for the NES and Famicom that was retailed by various distributors around the globe. Hacker International released an adult-targeted version in Japan.

Front of the box, AVE release.

Back of the box, AVE release. 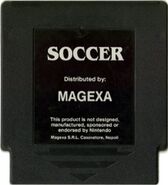 Magexa-HES cartridge front.
Add a photo to this gallery
Retrieved from "https://bootleggames.fandom.com/wiki/Ultimate_League_Soccer?oldid=42661"
Community content is available under CC-BY-SA unless otherwise noted.