VCOM (also spelled V-COM) is a brand of Famiclones, Mega Drive clones, and GBA clones (marketed as VCOM Portable) sold in Indonesia. VCOM also marketed their own versions of Play Vision Portable, some of them with GBA support, as well as catridges (all of them multicarts) for their Famiclones. VCOM also manufactured an educational system, with software developed by Elex Media Komputindo, a major Indonesian publisher, and Edu-Games, creator of the Bobby Bola series.

VCOM appears to have license to use Upin & Ipin branding, although there does not seem to be mention of Les' Copaque Production, the creator of the series, in the boxes featuring them. Most of these systems feature games where player sprites has been modified to feature the titular characters.

VCOM also is known to have advertised on Indonesian television, as well on publications aimed at children. Some VCOM boxes in 2010s feature a 15th anniversary sticker; a Wayback Machine dump of the company's website in 2015 suggested that the company was first established in 2001. 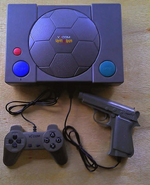 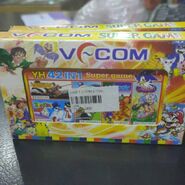 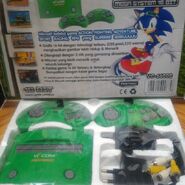 A box of VCOM system with Spider-Man branding

An Upin & Ipin edition VCOM portable Famiclone, with a tie-in game "UPIN IPIN ADVENT", which appears to be a hack of SETA's 8 Eyes. The title serial number is VC08B002V32.

A VCOM-branded PVP system, without any character branding
Community content is available under CC-BY-SA unless otherwise noted.
Advertisement