BootlegGames Wiki
Register
Don't have an account?
Sign In
Advertisement
in: Article stubs, Articles in need of cleanup, Games,
and 7 more

This article/section is in need of a cleanup.
This means the article has an informal appearance and does not meet the current standards of the BootlegGames Wiki. Clean up to fix that problem...

Wait and See! is a platform game developed by Dragon Co.. The game has Nu, pogodi! (Ну, погоди!, a famous Russian series of theatrical shorts similar to American series, Tom and Jerry) as an alternate title; however, apart from this and one of the cartridge labels, it has nothing to do with the actual cartoon.

The phrase "Nu, pogodi!" is more closely translated as "Well, Just you wait!" instead of "Wait and see!".

Bugs Bunny is featured in the title screen, despite that there's no references to Looney Tunes in the entire game. 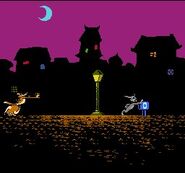 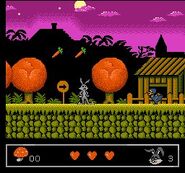