War in the Gulf is an horizontal shooter (like Gradius) made by NTDEC in 1991 for the Famicom.

The player controls an helicopter which features two weapons: a main gun and bombs to drop from below the vehicle. Pressing B will activate both weapon at once. An automatic defense mechanism circle continuously around the helicopter and can absorb enemy fire. However it can only sustain a certain number of shots.

Depending of the lastest bonus obtained, auto fire may or may not be available. Bonuses are generally found in hot air balloon that are present throughout the stage. Upon grabbing what appears to be something that looks like a puff of smoke, the the player can become invincible for a short period of time. This bonus is found either on the stage or by taking down certain enemies. Some stages feature a boss. 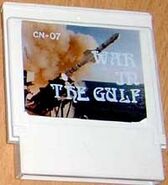 NTDEC NES release (front).
Add a photo to this gallery
Retrieved from "https://bootleggames.fandom.com/wiki/War_in_the_Gulf?oldid=44349"
Community content is available under CC-BY-SA unless otherwise noted.