Windows 2000 is a Famiclone port of the Windows 2000 operating system, released sometime after 2000.

Another variation called the SuborWin 2000 exists; it is in Russian, and features a few more applications (such as Poker and Minesweeper).The bootleg has a sequel titled Windows 98 (unrelated to the known Windows 98 bootleg). Another version is called Bravesoft Windows 2000 (similar to the SuborWin 2000). 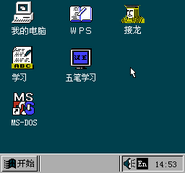