The X-Game 360 is a famiclone believed to be manufactured by AV&T.

The appearance of the X-Game 360 is very similar to the PX-3600. It has two buttons at the front and one at the top along with a fake disk drive with the words 'X-Game 360'. Inside is a cartridge slot that only works for Famicom cartridges. The controller used is similar to the PX-3600 but not identical, since it's thicker, uses circular buttons instead of the original more triangular ones, and is made a different color to match the console. 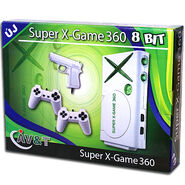 Retrieved from "https://bootleggames.fandom.com/wiki/X-Game_360?oldid=43800"
Community content is available under CC-BY-SA unless otherwise noted.