As in Xtreme 2 you can start the game as one of two playable characters, "Zook 1" (red) and "Zook 2" (purple), although the only difference seems to be in their appearance. It is unclear if either Zook 1 or Zook 2 is the same Zook that is in the original Zook Hero Z 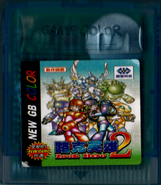