Zook Hero Z (Chinese title: 路克英雄 Z) is a platform game developed for the Game Boy Color by Vast Fame based off Capcom's Rockman / Mega Man series. It is the first title in the Zook Hero series and was released in 1998, 1999[citation needed].

The following is a summarized translation of the intro in-game and the back of the box:

Zook is a policeman for a city. One day, Doctor Mitt deploys his evil army of robots to advance on the city, his first step in conquering the world. Zook tries to stop the robots, but ends up getting shot and is in critical condition. With his life at risk, Dr. Meki chooses him for a robotic human project, thus giving him a new life. Continuing with his fight to protect peace, Zook Hero is then born.

The game is a basic Megaman clone, with fifteen stages in total. The main hub has six selectable stages, each with a robot master that gives you different abilites once defeated. Once three stages are passed you are taken to three other stages that must be beat in order to finish the final three, which then leads to another final six "Dr. Mitt's Fortress" stages before the final boss.

An English version was released as "Zook Z" (though it is still called Zook Hero Z in-game). All the game's text is translated, but has occasional spelling/grammar errors as well as certain parts of the dialogue having large gaps inbetween lines. Certain names were also changed (probably due to imperfect translation); for example Dr. Mitt is called Dr. Meet, and Dr. Meki is called Dr. Steve (the protagonist is referred to as Zook). It also contains the V.Fame copyright at the title screen (which certain releases removed) but aside from these changes the rest of the game's pretty much the same.

Back of the Taiwanese V.Fame release's box. 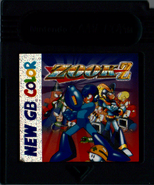 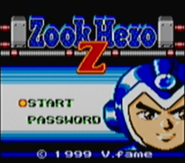 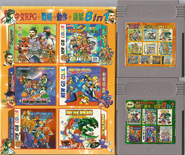 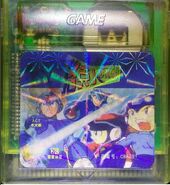 Translucent Rockman DX6 Cartridge
Add a photo to this gallery
Retrieved from "https://bootleggames.fandom.com/wiki/Zook_Hero_Z?oldid=43146"
Community content is available under CC-BY-SA unless otherwise noted.